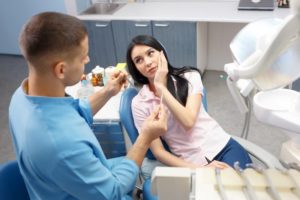 Do you feel nervous when you hear the phrase “root canal”? The procedure has a very negative reputation, to the point that 15% of Americans will avoid the procedure every year even if they’re told it’s necessary. However, a lot of the fear toward root canals is based on misconceptions, and the truth is that the surgery will do far, far more good than harm. Learn the truth between 4 common myths behind this highly misunderstood treatment.

First Myth: It’s Painful to Get a Root Canal

While it’s commonly thought that root canal treatments are excessively painful, in practice they actually don’t hurt any more than a simple filling. Anesthetics and sedation dentistry are used to keep the patient as comfortable and relaxed as possible, and while there may be some soreness during recovery, over-the-counter pain medication will usually help these symptoms.

The fact is that root canal therapy is meant to stop pain by removing the infected tissues and nerves inside the tooth. Thus, avoiding the treatment means you’ll ultimately experience more discomfort that you would have otherwise.

You may have stumbled upon this rumor if you’ve researched root canals on your own, but it’s based on badly designed research that was conducted in the 1920s. There’s been no valid evidence supporting the idea up to this day. In fact, root canals actually make illness less likely because they get rid of the bacteria in the roots of your teeth; if left alone, the infection might spread and cause all sorts of issues in other parts of the body.

Why save a tooth when you can just remove it? The answer is because losing a natural tooth instead of saving it can create all sorts of new problems. The jawbone will start to deteriorate, and your remaining teeth will start to drift; you could eventually suffer from serious alignment issues, jaw pain, and facial collapse. You’ll likely need to pay for a restoration such as a bridge or an implant to protect your health. A root canal lets you keep your natural tooth and prevents the need for other costly treatments.

While it’s true that root canals are lengthier than other procedures, the actual surgery can usually be done over the course of a single appointment. After that, all that’s left is the placement of a crown or a filling; this might require a second visit, but in many cases, they can be placed on the same day the root canal is performed.

It’s important to be comfortable with the treatment you receive. If you have additional concerns about root canals or other procedures, ask your dentist for the cold, hard facts. Don’t avoid the care you need because of a myth!

Dr. Gary Henkel has been practicing dentistry since 1981, and he has continued his education to ensure that he’s always providing patients in Horsham with state-of-the-art care with the latest technology. His practice, Horsham Dental Elements, is equipped with a surgical microscope that makes it much easier to perform an accurate root canal. To schedule an appointment, visit his website or call (215) 672-6666.

Sorry, the comment form is closed at this time.