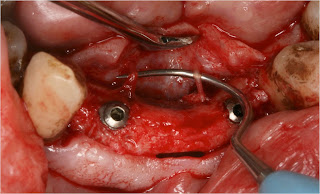 There was a question posed on osseonews about the potential for bleeding in the anterior mandible region.  Drs. Ganz and Flanagan, gave excellent responses and i encourage all to read them at http://www.osseonews.com/implants-in-the-anterior-mandible-hemorrhage-a-significant-risk/?utm_source=feedburner&utm_medium=feed&utm_campaign=Feed%3A+Osseodaily+%28OsseoNews%29

Comments Off on LINGUAL ARTERIES IN THE ANTERIO MANDIBLE VARIANT

Recently published in the journal of Periodontology, a link has been discovered between the incidence of anemia and periodontal disease.  This, combined with previous correlations of gum disease with cardiovascular disease, low birth weight, diabetes, and other conditions, provides further evidence that we must be more diligent than ever in treating periodontitis.

A new study suggests that severe gum disease (chronic periodontitis) may cause a reduction in red blood cells and haemoglobin leading to the blood disorder anemia.

The research, published in the Journal of Periodontology (1),found that over a third of people suffering from severe gum disease had hemoglobin levels below normal concentrations. Following a six month course of treatment to improve their oral health, all patients had improved levels of red blood cells, haemoglobin and all other clinical measures used to assess the health of the blood.

The research also suggested that women with severe gum disease had a higher risk of anaemia, compared to men. Less than three in ten men had anemia, compared to over four in every ten women.

Dr Nigel Carter, Chief Executive of the British Dental Health Foundation, said: “There have been several previous studies which have drawn a link between gum disease and anemia (2). This latest work confirms that chronic periodontitis can contribute to the development of anemia.

“The research suggests that the defense chemicals produced by the body as a result of inflammation of the gum can have the negative effect of lowering hemoglobin levels and other factors important to a healthy blood system.

“The good news is that treatment of gum disease appears to have a positive effect on the severity of the anaemia, especially in women. Treatment, over a relatively short time frame of three to six months, improves haemoglobin levels and red blood cell counts.

“Many people continue to underestimate the importance of good oral health to the body’s general health. Prevention is the key and it is really important that everyone adopts a simple but effective oral health regime to help stay fit and healthy. Brushing for two minutes, twice a day with a fluoride toothpaste and cleaning between the teeth, good eating habits, having sugary food and drinks less often and regular dental check-ups can help prevent most dental problems.”, advised Dr Carter.

Comments Off on PERIODONTAL DISEASE LINKED TO ANEMIA!
Socialize: