Recent research out of the University of Gothenberg indicates that increasing surface roughness of implants at the nano level speeds the integration process.

Researchers at the University of Gothenburg have conducted studies on the surface arrangement of dental implants both at the micro and nano level to enable speedy healing of patients.

Johanna Löberg from the Department of Chemistry at the University of Gothenburg stated that by causing an increase of the active surface area at the nano scale and altering the implant’s conductivity, the biomechanics of the body is influenced in such a way as to avoid discomfort and to speed up the healing process. 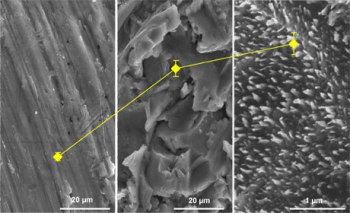 It was evident that the surface of dental implants is often associated with the level of roughness, from the superimposed nanostructures to the thread. When the implant is placed in the bone, the bone tissue experiences a mechanical force known as biomechanical stimulation, which leads to the formation of new bone. Although roughness is not the only factor that influences healing, it is crucial for new bone formation. It is also necessary to measure and illustrate the appearance of the surface in detail.
Johanna Löberg has formulated an approach that explains the topography of the implant from nanometre to micrometre scale. This approach enables theoretical estimation of placing the implant in the bone by diverse surface topographies. It can be used to develop new dental implants and to enable optimization of properties for quick healing and increased bone formation. The results demonstrate that a small increase in conductivity delivers improved cell response and quick deposition of minerals that are essential for bone formation. Surfaces with a clearly defined nanostructure feature a larger active area and react faster to the deposition of bone-forming minerals.
The project was performed by the University of Gothenburg in collaboration with the Astra Tech AB in Mölndal, and has scope for further study.
Source: http://www.science.gu.se/

AVASTIN- ANOTHER DRUG ASSOCIATED WITH ONJ

As you know, intravenous bisphosphonates and to a lesser extent oral bisphosphonates like fosamax have been associated with an increased rick of osteonecrosis of the jaw (ONJ).  Recently, Dr. Richard Wynn at the University of Maryland published on a human monoclonal antibody, bevacizumab (Avastin), used in treating metastatic carcinoma, that also appears to be associated with an increased incidence of ONJ.

Dr. Richard L. Wynn is Professor of Pharmacology at the University of Maryland Dental School. He holds a BS degree in Pharmacy and a PhD degree in Pharmacology. He chaired the Department of Pharmacology at the University of Maryland Dental School from 1980 to 1995. He is the lead author of the Drug Information Handbook for Dentistry, a co-author on many other dental drug publications, an author of over 300 refereed scientific journal articles, a consultant to the Academy of General Dentistry, a featured columnist, and a featured speaker presenting more than 500 courses in continuing dental education. One of his primary interests continues to be keeping dental professionals informed of all aspects of drug use in dental practice.

Bevacizumab (Avastin®): Another Drug Associated With Osteonecrosis of the Jaw

Antiangiogenic Agents and the Risk of ONJ

Dental Management to Reduce the Risk of ONJ

The importance of special dental management to reduce the risk of ONJ in patients taking bevacizumab was shown in a recent report (Francini F, Pascucci FF, Francini E, et al, “Osteonecrosis of the Jaw in Patients with Cancer Who Received Zoledronic Acid and Bevacizumab,” J Am Dent Assoc, 2011, 142(5):506-13). They looked at cancer patients on zoledronic acid and chemotherapy combined with bevacizumab who underwent a dental exam before starting treatment. They found that none of the patients developed ONJ.
The study included 59 patients with either breast cancer or nonsmall cell lung cancer who received 4 mg zoledronic acid I.V. every 4 weeks and 15 mg per kg bevacizumab every 3 weeks. The median time of receiving zoledronic acid was 18 months and the median time of receiving bevacizumab was 16 months. All subjects received a dental exam and panoramic x-rays before starting treatment and every three months thereafter until the patient died or was lost to follow-up. If needed, patients received periodontal disease treatment and underwent tooth extraction before they received any drug.
None of the patients required dentoalveolar surgery while undergoing cancer treatment. After a median follow up of 19.7 months, none of the participants developed ONJ. The conclusion was that a bisphosphonate combined with an antiangiogenic drug did not predispose to ONJ in participants with cancer that metastasized to the bone, who underwent a baseline dental examination and preventive dental measures.

Drug information is constantly changing. Promote medication safety in your practice with Lexicomp Online for Dentistry.
Comments Off on AVASTIN- ANOTHER DRUG ASSOCIATED WITH ONJ

EVER WONDER WHAT TO CHARGE FOR AN IMPLANT???

A recent survey was done and asked this very question.  here are the results.

Comments Off on EVER WONDER WHAT TO CHARGE FOR AN IMPLANT???

EVER WONDER WHAT TO CHARGE FOR AN IMPLANT???

In our teaching courses, we are often asked by beginning implatologists what to charge for implant placement.  Here is a recent survey which asked that very question.

Comments Off on EVER WONDER WHAT TO CHARGE FOR AN IMPLANT???

Philadelphia’s Implant Information Central!: STEM CELLS WHAT ARE THEY, AND HOW CAN THEY HELP?

Philadelphia’s Implant Information Central!: STEM CELLS WHAT ARE THEY, AND HOW CAN THEY HELP?: “Dr. Bruce Freund recently wrote a brief summary about stem cells and what they can do for us in dentistry and in implantology. They certain…”

Comments Off on Philadelphia’s Implant Information Central!: STEM CELLS WHAT ARE THEY, AND HOW CAN THEY HELP?

STEM CELLS WHAT ARE THEY, AND HOW CAN THEY HELP?

Dr. Bruce Freund recently wrote a brief summary about stem cells and what they can do for us in dentistry and in implantology.  They certainly hold a great deal of promise for the future.  The article can be accessed here:

Comments Off on STEM CELLS WHAT ARE THEY, AND HOW CAN THEY HELP?

GENETICS CAN BE A RISK FACTOR FOR DENTAL IMPLANTS!

A recent article in the Journal of Oral Implantology has identified a combination of genes that when present may adversely affect dental implants.  This could change the way we evaluate patients for dental implant reconstruction.

Journal of Oral Implantology — The health of the surrounding tissue affects the success of a dental implant. Identifying and reducing risk factors is therefore a key step in the implant process. Now a combination of genes has been identified as a possible indicator of greater tissue destruction, leading to negative outcomes for implants.
The authors of an article in the current issue of the Journal of Oral Implantology report on a study of individuals with the combination of interleukin (IL)-1 allele 2 at IL-1A-889 and IL-1B+3954. These people are “genotype positive” and are susceptible to increased periodontal tissue destruction.
Peri-implantitis, or the process of tissue inflammation and destruction around failing implants, is very similar to periodontal disease. The researchers sought to find any association of these genotypes with the severity of peri-implantitis progression and the effect of this combination on treatment outcomes.
This study compared two groups of patients, all of whom had implants. The first group consisted of 25 patients with peri-implantitis, while the second group of 25 patients had healthy tissue. Seventeen patients from the first group and five from the second group were genotype positive.
Patients in the first group, those with peri-implantitis, took part in a treatment and maintenance program. The genotype-positive patients in this group experienced greater periodontal tissue destruction and, increased discharge from tissues. The genotype-negative patients responded better to treatment. Statistically significant differences were noted between the groups.
The combination of these two alleles in patients with inflamed periodontal tissues denotes a risk factor that can lead to further tissue destruction. Patients with the specific genotype can have exaggerated local inflammation. Gene polymorphism may affect the outcomes of treatment for peri-implantitis in genotype-positive people and affect the long-term success of implants.
Full text of the article, “The Effect of Interleukin-1 Allele 2 Genotype (IL-1a-889 and IL-1b+3954) on the Individual’s Susceptibility to Peri-Implantitis: Case-Control Study,” Journal of Oral Implantology, Vol. 37, No. 3, 2011, is available by clicking here.
The Journal of Oral Implantology is the official publication of the American Academy of Implant Dentistry and of the American Academy of Implant Prosthodontics. It is dedicated to providing valuable information to general dentists, oral surgeons, prosthodontists, periodontists, scientists, clinicians, laboratory owners and technicians, manufacturers, and educators. The JOI distinguishes itself as the first and oldest journal in the world devoted exclusively to implant dentistry. For more information about the journal or society, click here.

Source:
DentistryIQ
Comments Off on GENETICS CAN BE A RISK FACTOR FOR DENTAL IMPLANTS!
Socialize: